We arrived at our lodge very close to Lake Manyara for a two night stay before leaving for home.  The lodge was relatively new, with wonderful rooms (with air conditioning!), staff and restaurant, and it was nice being so close to the lake, just a few miles to the southeast.  The hotel with its dozen or so cottages is perched near the crest of a dramatic trough sinking some 900 feet to the lake.  There were several trees sporting a number of nest-building Vitelline Masked-Weavers. Besides the mask, these birds show off a combo of egg-yolk yellow and red plumage, and just for us they were especially noisy in the early morning!

The one negative of our visit was that our trusty guide could not be accomodated on the premises but did find a room in the small local town nearby, one that looked rather impoverished.

The lake is part of the Eastern Rift Valley and located about 80 miles southwest of Arusha.  Only part of the alkaline lake is included in Lake Manyara National Park.  The lake size and depth fluctuates during the season, with a maximum depth around 10 feet and averaging about 3 feet.  Like Mono Lake in the United States, there is no outflow so the water has become more saline over time.  The lake is fed by rainfall and when there is little of that, the shoreline retreats quickly to form vast alkaline mudflats which may grass over, attracting water buffalo, wildebeest and of course the wildebeest buddies, zebra. 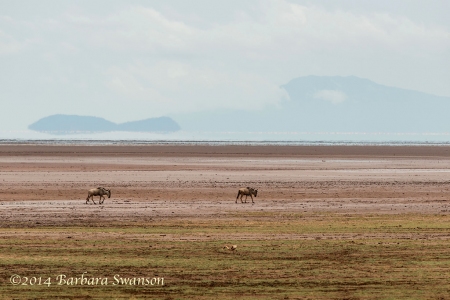 We had a bit of a slow day at Lake Manyara, possibly because of the weather.  We could see dark storm clouds in the distance and our guide said that it was good we had driven from the Serengeti the day before as there was a large rain storm and an accident in the afternoon along the route we had taken.  Driving Tanzania is not like a drive in the road-rich states of home which interconnect often.  From the Serengeti to Ngorongoro to Lake Manyara and on to Arusha, there is a single highway and at times, that highway may be only 10 feet wide, weather-permitting.

I should note that for our trip we had chosen to drive everywhere instead of taking a small plane.  While we spent more time in a vehicle, I think we had a better understanding of the countryside this way.  Most importantly we were not weight restricted and I was able to bring all the camera gear I needed and didn’t have to skimp on clothing.  As an aside, we did some hand laundry in the sink at our lodge accommodations and had some laundry done by the staff as well.

Map: Situated at our hotel. Click on upper-right box to open in full screen mode.

Lake Manyara had receded so we were not able to get close to it in most places.  Far in the distance, past the alkaline mud flats, I could make out flamingos in the water. A flock of whistling ducks flew overhead.  Several wildebeests and a herd of zebra were on the flats, but there did not seem to be ample grasses to eat.  Applying my human logic, I’m perplexed as to why they seem so exposed for so little food return.  Perhaps they can easily spot a predator when they are grazing these mudflats?  Do pawed predators fare worse in a mud environment than the getaways of the highly-evolved, single-toed ungulates?   What keen strategies each species has developed to maintain checks and balances, even though in many cases it may just be the prolific reproduction of the species that keeps its place on this green earth planet.

In another location we spotted some hippos lying down on land.  Of course, hippos have little to fear of predators and they seem perfectly willing to pose, especially when lounging.  We had a few minutes to walk around a little bit so I could see some of the plant life more closely.

The next day, after checking out, we drove to a hotel and met a local guide for our Great Rift Valley escarpment walk.  It was about 2 hours and he showed us the views and talked about the local plants.  The Great Rift Valley is a series of rifts running from Lebanon to Mozambique.  We walked along the East African Rift, also known as the Gregory Rift, which also runs through Kenya and includes Mt. Kilimanjaro and Ngorongoro Crater.  The rift is believed to have reached Tanzania from the north about 8 million years ago.

The Great Rift Valley receives a lot of attention when speaking of the radiation of modern man (Homo sapiens) from Africa to Asia because the system meanders northward into the modern region of Lebanon two and a half thousand miles away.  The rifts, over the millions of years of their existence, correspond to fault zones which have created the basins of Eastern Africa, supporting vast lakes both shallow and deep and to a large degree the success of the human and animal forms that lived in the rifts.

After that we had a wonderful late lunch on the hotel deck overlooking the grounds, then started the drive back to Arusha.  We stopped at a touristy shopping area where I bought local coffee to take home and admired the work of local artists.  Our guide stopped along a local street with women selling bananas so he could buy some for his trip home.  As we stopped, multiple women swarmed over trying to sell him their fruit.  Two men came over to my friend and I to sell inexpensive handmade jewelry; I bought some from one man but should have bought from both of them as the other man looked disappointed that he didn’t make a sale.  I prefer to buy things directly from people instead of at stores, so in future trips I would ask our guide to do that.  It was convenient that Tanzania uses the US dollar so we did not have to change currency.

All good safaris must come to an end, and some travel notes…

We ended the trip at the safari outfitter’s office, where we were able to change into our plane travel clothes.  We said good-bye to our guide, who had to catch a long bus ride back to his home and family.  My friend and I had discussed ahead of time how we were going to tip, and as our guide had given us very good service and went out of his way to accommodate our photography, we gave him an excellent cash tip.

It was still a long ride to the airport in a small company van.  The skies were clearing for the first time on our trip so I was able to see Mt. Kilimanjaro for the first time.  We had plenty of time at the airport and it was good to get on the plane late that night.  We did a short hop to Dar es Salaam but didn’t get off, and then I was asleep until waking up over Italy.  As a note, we had to go through security again in Amsterdam at the airplane.  I had to take my 500 mm lens out for security to more closely inspect but otherwise there was no issue carrying my camera gear and laptop onto any of the planes we took.

Overall my friend and I had an excellent trip and I would do it again.  Having our own guide and the freedom to go at our own pace was wonderful; the only thing we missed was having other travel companions to talk to at dinnertime.  Because we stayed out all day and didn’t come back to our accommodations for mid-day, I would try to book farther in advance so that we could have more choices of lodges that perhaps were not all as high-end.  I would bring my tracking GPS device so that I could plot our route afterwards, which would also make it easier to enter my bird sightings into eBird.

I hope that this African safari blog has been enjoyable and informative.

Some Favorite Photos from Lake Manyara

Click on any photo in the gallery below to enter a manual slideshow containing full images and descriptions and social sharing links.  All photos by Barbara Swanson.