After Tarangire National Park, we drove to our accommodations near Ngorongoro Crater.  Our guide got us there a little early as this was an expensive lodge and he wanted to be sure that we had a little time to enjoy it!  We were welcomed with hot cloths and a drink, and later they had a wonderful spread of homemade chips that were delicious.  The lodge overlooked a coffee plantation and we spent a little time on our deck enjoying the view.

The disadvantage of the lodge was that it was some distance from the crater, so they packed us a to-go breakfast and lunch so that we could get started before sunrise.  At the entrance we had to wait some time while the guide got a permit, and our vehicle was checked out by the resident baboons!  Our guide had left his lunch in the front seat and the baboons were very interested in trying to find a way to get at it, leaving prints all over the windshield.

We stopped to photograph a bird on the way down into the crater. One of the riches of Africa is its overwhelming diversity to the extent that species identification is sometimes a challenge. There are close to 600 bird species identified in the crater and this one stumped us for a while. Further research proved it to be a white-browed coucal (Centropus superciliosus), a kind of cuckoo.  In an unusual pose, the bird is displaying some of its wing feathers and outer contour feathers which one can see are parted to reveal the cushiony, insulating semiplume feathers beneath, and of course showing the proud tailfeathers below the main body.  At first glance, this bird might be wearing a luxurious brown coat or shawl, but all kidding aside we suspect it was drying its feathers in the early morning after a bath in the fresh dew collected in the foliage of the acacia tree.  The bird has an interesting call that some say resembles the sound of water being poured out of a vessel.  To hear this sound for yourself, try a visit to the page for this bird at the user-friendly birder site, birdwatch.org.  The page will open in a new tab.

Ngorongoro Crater is the largest inactive, unfilled crater in the world, left from a volcanic eruption several million years ago.  It is about a 2000 foot drop from the crest to the floor of the crater, which is at an elevation of 5900 feet.  To run across it and back is to run a marathon.  As we drove around the outside of the crater to and from our lodge, we noticed that there was a wet side with lush vegetation and an arid side.  Weather in the crater is generally temperate in February, being the relatively dry season between the October-December rains and the rainier days of March-May.  Cloud cover attended our visit to the crater and was the weather pattern most experienced during our trip.

Map: Situated in the crater.  Click on upper-right box to open in full screen mode. 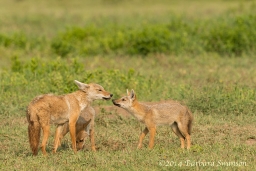 After descending into the crater, our guide hesitated.  Which way to go?  The vehicles in front of us went straight, so we went to the left.  We soon came upon two African golden wolf pups and the mother arrived while we watched.  She regurgitated some food and the pups ate it so fast that I only saw it once between shutter clicks!  She then chased off a hyena.  It was nice to observe these things as the only vehicle around.  We eventually arrived at the hippo pool, which was crowded with vehicles in the parking lot.  My friend and I dashed to the bathroom (I think there was a line!) and then looked at the hippos before returning to the vehicle, where we realized that our guide wasn’t able to leave the vehicle alone so hadn’t been able to use the restroom.  Oops.  We never made that mistake again. 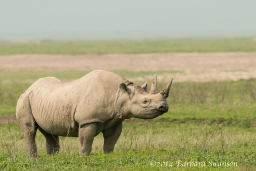 Probably the most iconic animal in the crater is the black rhinoceros, and we were very fortunate to see six, which we were told was a high number to see in one day.  These animals are highly protected due to their critically endangered status and being hunted by poachers.

We also saw one elephant “tusker” with huge long tusks.  This animal was away in the distance and for some reason I didn’t take a photo, which I regret, as nowadays it is rare to see an elephant with such long tusks due to poaching.

In the morning we drove by a lone zebra that was thought to be dying.  Later in the day, when we were observing a rhino, the nearby vehicles started to leave until we were the last one left.  The guide was hoping the rhino would come closer to the road, but it did not and we finally left.  It turned out that the zebra had died and the hyenas had come in for a feast.  The whole carcass was circled by hyenas, which was circled by vehicles.  Park staff was there to control the vehicles, as it was very crowded.  Not to be deterred, our guide drove on and while we were driving on the road along all the vehicles, he talked to one of the other guides, who then left.  Our guide parked and we watched the action from the perfect spot (see the photo captions in gallery below for more information).

After it was all over and vehicles were starting to leave, another guide got out of his vehicle, came over and yelled at our guide.  As all of these interactions took place in Swahili, I don’t know quite what happened, but piecing it all together it seems that our guide bumped another to get us into a prime spot.  I have no idea what that other guide did once he left the circle, but I had no control over this.  This was the one time on the trip that our guide’s timing was off, as we should have left earlier to come see the hyenas, but I can also understand why our guide wanted to wait to see if we could have a close encounter with the rhino.

Near the end of the day, we saw one more rhino, and this one was moving closer to the road.  We stopped to observe and had some good views.  Our guide, however, was not happy as some of the other vehicles kept moving as close as they could to the rhino, which seemed to impact the rhino a bit.  We finally had to leave, as the park is very strict on what hours you can be in the park and we had a ways to go to leave.  Altogether we enjoyed Ngorogoro Crater, especially seeing the rhinos, but it really wasn’t the highlight of our trip.

Click on any photo in the gallery below to enter a manual slideshow containing full images and descriptions and social sharing links.  All photos by Barbara Swanson.