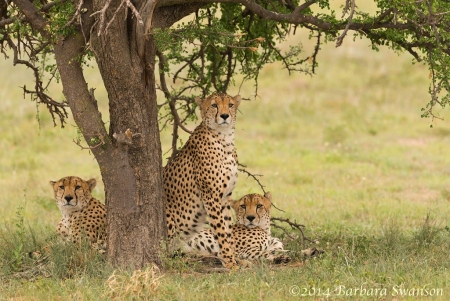 Arusha
After arriving the night before at Kilimanjaro International Airport, we spent our first day in Tanzania exploring Arusha National Park and Momella Lakes. This park, located southwest of Mount Kilamanjaro, is 53 square miles. While the park is not as well known or visited as some of the other Tanzania parks, it was a great introduction to Africa.

Read More on Page 2. To enter gallery only, click on image left.
Tarangire
Tarangire National Park, named for the river through it, is famous for its high density of elephants and baobab trees. Visitors to the park in the June to November dry season can expect to see large herds of thousands of zebra, wildebeest and cape buffalo. Our trip in February proved quite rewarding just the same.

Read More on Page 3. To enter gallery only, click on image left.

Ngorongoro
The Ngorongoro Conservation Area includes a prominent cluster of extinct shield volcanoes. The largest, Ngorongoro Crater, is nearly 13 miles across, and one of the Seven Natural Wonders of Africa. Tanzania also has two of the other six, Kilimanjaro and the Serengeti Migration. Ngorongoro is a name taken from the approximate sound of cowbells (ngoro ngoro) as spoken in the tonal language of the Maasai cattle farmers who once lived in the crater.

Wildlife in the crater is abundant, home to some 25,000 large animals. Lake Magadi, an ephemeral lake within the crater, is at times pink with flamingos.

Read More on Page 4. To enter gallery only, click on image left.

Serengeti Migration
We visited the southern Serengeti Plain in the "springtime" of the wildebeest migration, the calving season of the yearly pattern of herd movement that sees them ahoof for 500 miles round a great elliptically-shaped path.

It is the largest migration in the world, numbering two million animals, including zebra and gazelle. They collectively protect each other as much as practical from the onslaught of the opportunistic predators that follow along.

Read More on Page 5. To enter gallery only, click on image left.

Serengeti
Serengeti National Park stretches across the Serengeti Plain well over 100 miles from Ngorongoro Conservation Area to Lake Victoria. Travel is by more or less 20 foot wide unimproved roads weaving about widely scattered Maasai homes. Accomodations for the night are quite variable and may be crowded in some camps. Our camps were basic safari tents and there were eyes in the night; one never sets their shoes outside for air, we were warned, as hyenas find shoes favorite collectibles.

We were not disappointed with the Great Migration of Wildebeest spread across a virtually endless vista of grasses and kopjes.

Read More on Page 6. To enter gallery only, click on image left.

Lake Manyara
The lake is in a closed basin with no outflow. It is fed by underground springs and by several permanent streams and rivers that drain the surrounding Ngorongoro Highlands, but the vast majority of the inflow (over 99%) comes from rainfall. The lake's depth and the area it covers fluctuates significantly. At its maximum, during the wet season, the lake is 40 km wide by 15 km with a maximum depth of 3.7 m. In 2010, a bathymetry survey showed the lake to have an average depth 0.81 m, and a maximum depth of about 1.18 m.

Read More on Page 7. To enter gallery only, click on image left.